A drunk driving charge can have long-term effects on your life. A July 2020 study from The Centers for Disease Control and Prevention (CDC) indicated 2.5 percent of Massachusetts state residents admit to driving drunk. 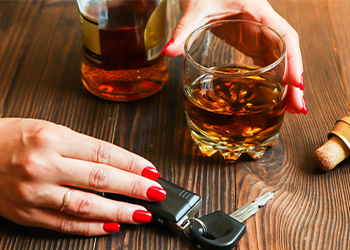 Nationwide, only 1.7 percent of respondents said they’d driven after drinking too much. If you have been charged with drunk driving your future, finances, and even your relationships may be at risk.

DUI charges have serious ramifications and should only be faced with experienced legal counsel. McBride Law has the knowledge and resources you need to defend your rights. Attorney Devon McBride has years of experience as well as detailed knowledge of state criminal laws. He serves clients in Quincy, Massachusetts, and the neighboring areas of Norwell, Hingham, Weymouth, Boston, and anywhere else across the state.

If you are charged with drunk driving, the penalties will depend on whether or not you have previous convictions. If you are a first or second-time offender, it is usually considered a misdemeanor. Third or more time offenders can get charged with a felony. The punishments can include jail time, a probationary period, license suspensions, and fines ranging from $500 - $25,000.

If you are a second-time offender or more, you can also be ordered to get the Interlock Ignition Device (IID) in your car at your own expense. This device is a small handheld breathalyzer a driver must blow into prior to starting their vehicle. If the IID registers a BAC higher than allowed, the vehicle will not start.

Unfortunately, there are a lot of myths and misconceptions surrounding DUI charges that can be misleading. Some of the more common myths include:

A DUI Charge Isn’t Worth Fighting

With the repercussions a DUI charge can have on your life, it is worth fighting. It’s possible that the stop was unlawful, the testing was not administered according to state laws, the arresting officers didn’t follow proper procedures, or there were extenuating circumstances that led to an inflated BAC level. An experienced DUI defense attorney can review your case and outline a strong defense strategy.

The Charge Is So Common It Isn’t Serious

While a DUI charge may seem commonplace, its repercussions are nothing to take lightly. Between a suspended license, fines, jail time, and more, the penalties can have long-term effects on your life. In addition, a criminal conviction stays on your record and follows you to jobs and other aspects of life.

You Must Submit to A Field Sobriety Test

In Massachusetts, you do not have to submit to a field sobriety test and you can refuse without any adverse consequences. This refusal cannot be used if you go to trial as evidence against you. Oftentimes, the nature of these tests, which may involve walking a straight line, reciting the alphabet backward, or following an object with your eyes, are not accurate indicators of impairment.

However, once an arrest has been made, you are required to submit to a chemical test such as a breath or blood test. Refusal to do so may result in penalties.

Massachusetts state law says that you can be charged with a DUI for operating a vehicle under the influence in any public place. "Operation" of a vehicle doesn't necessarily require that the engine is running or that there is actual movement.

A DUI Will Fall Off My Record in 7 Years

In Massachusetts, a DUI falls off of your driving record in 10 years. You will be assessed five points, which remains on your record for six years. The conviction, however, stays on your criminal record for the rest of your life. You can request to have it removed from your public record after the 10 year period but chances are slim that it’ll go through, especially for those with multiple offenses.

Facing a DUI charge is stressful and frightening. The complexities of the criminal justice system can overwhelm you. You need a competent defense attorney on your side. If you've been arrested or charged with a DUI in Quincy, MA, call McBride Law as soon as possible to schedule a free consultation.