Can a Bar Fight Lead to an Arrest?

According to Psychology Today, more than two-thirds of domestic violence incidents involve an abusive partner who has been drinking. Alcohol also has been tied in with half of all murders. These statistics show that it’s not unusual for people in bars consuming copious amounts of alcohol to get involved in confrontations — in the tradition of the bar fight. 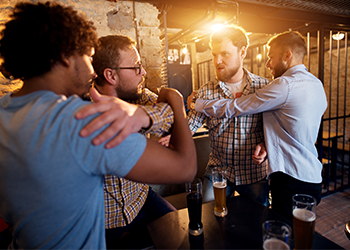 If you’ve been arrested and charged with disturbing the peace or assault arising from an incident in a bar or elsewhere when you and another patron traded barbs — and then fists — you are going to need an experienced criminal defense attorney to plead your case. There are valid legal defenses that you may be able to employ.

The attorneys at McBride Law will meet with you, discuss your situation, and work with you to exercise your full rights to obtain the best available outcome. McBride Law proudly serves clients throughout Quincy, Norwell, Hingham, Weymouth, and other areas across Massachusetts.

Say you do get into an altercation with another person, whether in a bar, a parking lot, or a sports stadium — it doesn’t really matter where. Merely threatening another person verbally can lead to an assault charge, with no contact needing to take place. Maybe it’s just a simple poke in the chest. If the other person feels threatened, that can rise to the level of simple assault. Trading blows most certainly qualifies.

Aggravated assault, or assault and battery, can be charged if you use a “dangerous weapon” in the altercation. A dangerous weapon can be almost anything from a baseball bat to a brick, a knife, or even to your shoes if they are steel-toed or heavy enough to cause injury. Hitting someone over the head with a beer bottle in a bar — or even just throwing the bottle at someone — can qualify as well.

Simple assault in Massachusetts is a misdemeanor punishable by up to two-and-a-half years in prison and a fine of up to $1,000. Aggravated assault can land you in prison for up to five years with a fine of up to $5,000 and is considered a felony.

Disturbing the peace is punishable by a fine of no more than $150 for a first offense, but subsequent offenses can land you in jail for up to six months, a fine of up to $200, or both.

Not every fight is a joint venture. Sometimes one participant is merely exercising self-defense, and self-defense is certainly a valid argument in court against an assault charge or even one of disturbing the peace. If you exerted only the amount of force necessary to defend yourself against the present danger, that may be considered self-defense.

You can also present the case that it was just an argument among friends that got out of hand and that neither of you wants to press charges against the other.

Depending on the situation, you can also argue that you were merely defending your property. Say someone attempts to steal your watch or break into your car and you use force as a defense. You can argue that you used only a reasonable amount of force needed to defend your property.

There are also situations in which one person rushes to the defense of another and an altercation results. Again, you can argue that you used only the force necessary to prevent harm to another person.

Arguing that you were drunk, on drugs, or were taunted and provoked into the encounter are not defenses. You must show that what you did in the situation is what any reasonable person would have done and that you were not the instigator.

You may be tempted to just throw up your arms and give in if all that is going to happen to you is a $150 fine, but remember, that fine and what caused it will become part of your criminal record. A criminal record can make it difficult to obtain jobs, get professional licensing, and qualify for public benefits. You want to avoid any conviction, even if just for disturbing the peace.

If you’re charged with assault, the stakes certainly rise higher. There is no one-size-fits-all defense. The team at McBride Law will meet with you, discuss the circumstances that led to your charge, and then develop an individualized defense to strive for the best possible result.

If you’re facing any charge arising from an altercation or public incident in or around Quincy, Massachusetts, contact McBride Law immediately for a free consultation.